Music by the Magi

An afternoon of good news and good vibes 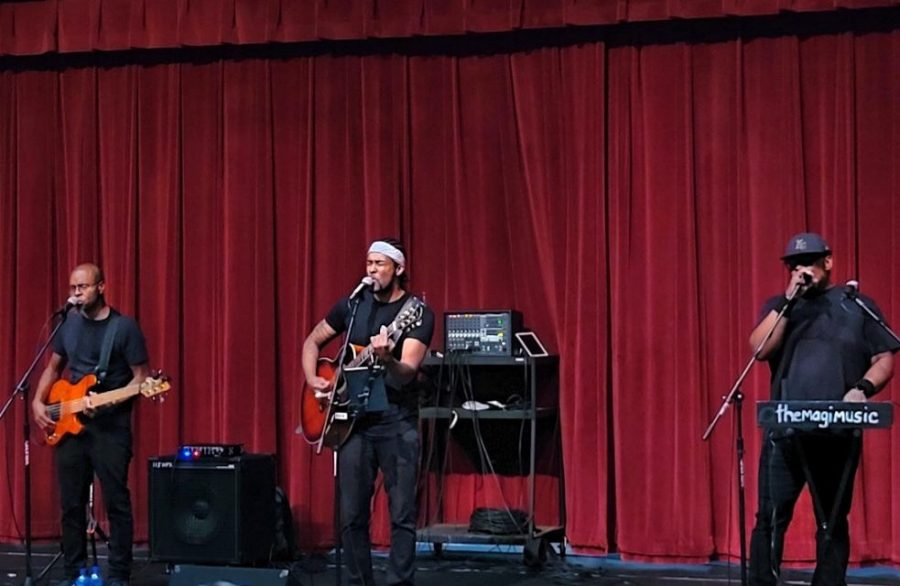 The Magi brought Good Vibes and Good News to Lake Land’s stage Sept. 1. The trio’s positive message and sound filled the theater and pulled in a crowd for the first SAB event of the semester.

The Magi is a trio of songwriters and  musicians from Nashville, Tennessee who play a mixture of their own singles and some famous songs mashed up to get their message of positivity across to the audience.

Some of the covers that were played include, but are not limited to, Journey’s “Don’t Stop Believin’”, Pharrel Williams’ “Happy”, The Temptations’ “My Girl”, and Ben E. King’s “Stand By Me”.

The band’s underlying tone of positivity was held up throughout the entire show, as well as afterwards when the band came off the stage to try and connect with the crowd.

The band held open discussions with the audience even during the show, and kept everyone involved the whole time. There were clapping hands, nodding heads, and once Damien Horne (lead singer) threw one of their shirts out into the crowd for a Laker who was deemed deserving.

That same student later was serenaded with an impromptu freestyle rap by Horne in the middle of one of their songs.

The three members all had solo careers and experiences before the Magi, which led to them all having different duties in the band to bring everything together.

To start off, we have Kenny Carter. Carter plays bass and is also the musical director of the band. He also plays a lead role in the band’s recording and production work. Next there is Damien Horne, the lead singer and acoustic guitarist. Last, but certainly not least, there is David “DJ” Lee. Lee is a beatboxer, singer, songwriter, and producer. Along with his vocals, DJ’s live beatboxing and looping is the “rhythmic backbone” for The Magi’s live performances.

“They say that style is a product of limitation. Our band is three piece, no drummer, no electric guitar. We had acoustic, beatboxing, and bass. We can all sing and write. That was the recipe,” says Carter.

The group first got to know each other many years ago through a mutual friend. Originally there were going to be 4 of them together, but the fourth member couldn’t make it to their first meeting.

Carter said while reminiscing, “We just decided to start wringing a song.” That song ended up being their first single, “Try”.

DJ said with a smile, “Looking back, that was a really good writing session, it just all went perfectly.”

After that, the rest was history. Horne, who had more contacts at the time, decided that the trio needed to be heard.

The group’s first gig as ‘The Magi’ was at Ole Smoky Distillery in Gatlinburg, TN. The Magi played there once or twice a month for the Sunday Morning Brunch.

Though the group had already established their positive outlook on their music and on life in general, Carter said that COVID-19 and the pandemic just inspired them to go even further.

“Our whole creed is that we want to do something that is positive and spreading good news,” DJ said, “we are on a mission to uplift people.”

“When everything else is so negative, we might as well put out some positivity.” said Carter.

SAB events like these are important for students. Horne says, “to have a break like this to get away is really important. College is a hard time, even when you’re not going through everything going on right now.”

He also says “It’s always good to be re-energized, and I think music is the thing that does that. Especially when you couple that with positive uplifting lyrics.”

DJ described the need for this downtime by saying “we live in such a digital world, and having this organic sound as a band is a nice change. Seeing the live music is refreshing.”

Fans can find The Magi’s singles on streaming platforms such as ITunes, Spotify, Youtube, Soundcloud. keep an eye out for their new album coming out sometime in November. You can also find the band on nearly all social media platforms @themagimusic.

In an ending comment, Carter told the crowd, “We can’t wait to come back someday and see all your beautiful smiles.”

The band ended their interview wanting to thank Lake Land for having them and “encourage everyone studying right now to persevere, look out for other people and keep your eyes looking upward, not so much downward.”

Read more about The Magi on their website: https://themagimusic.com