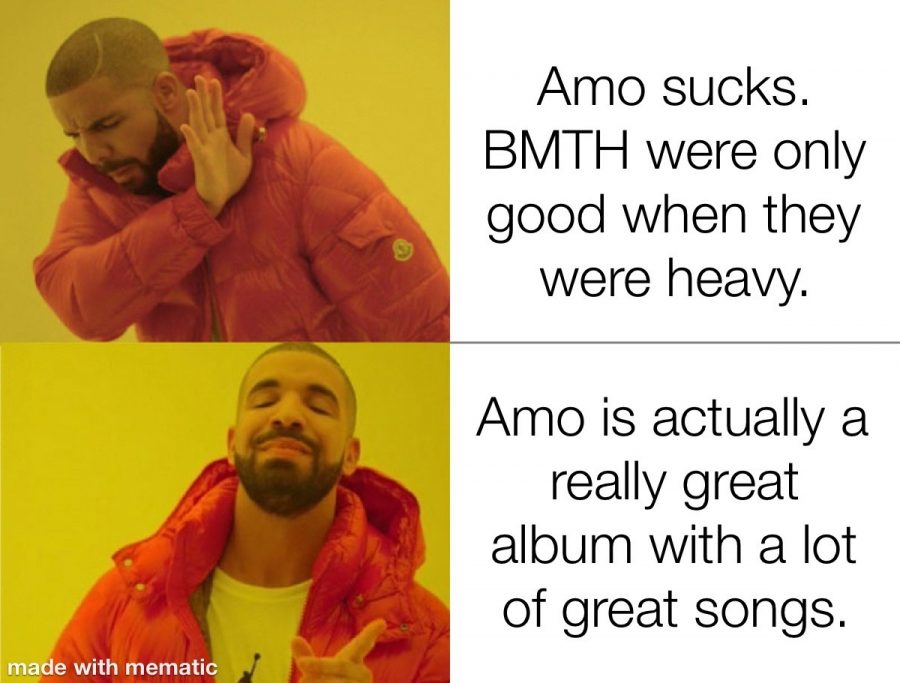 To me, when an artist changes their sound and decides to try something a little different from what they typically do, they are growing as people and as musicians. It’s important for musicians to experiment with their sound to keep them from getting burnt out or hitting a creative roadblock. Bands don’t want to make the same album over and over, so changing up their style gives each of their records its own uniqueness.

In the mid-2010’s, U.K. rock band Bring Me The Horizon began to experiment with their sound. In 2015, the band released their fifth album, “That’s the Spirit.” When comparing “That’s the Spirit” to the prior four albums that the band has released in their career, it was noticeably lighter though it was clearly still a hard rock album. While this new album still contained some heavy moments, it did not compare to the intense riffs and aggressive vocals of the group’s previous work, especially when compared to the band’s first album, “Count Your Blessings,” which was practically a metalcore album. Even though their sound was slightly different, the fans responded positively to the album for the most part. While some expressed that they didn’t like this new album, others really seemed to enjoy it. “That’s the Spirit” came out while I was in high school, and I remember it quickly became one of my favorite albums at the time.

Fast forward a couple more years into 2019. Bring Me The Horizon released their sixth studio album titled “amo.” With this record, the band decided to change their sound even more. While it is still a rock album, there are a lot of differences between it and “That’s the Spirit.” From the perspective of a fan, it appears that there are several instances of beats and rhythms that almost sound as if they were inspired by EDM music. There are also several orchestral moments within some songs. Some songs are heavier than others, but for the most part their sound is somewhat indescribable. To really understand this albums sound when comparing it to Bring Me The Horizon’s previous sound, I would say you just have to listen to it for yourself to really grasp what “amo” is like.

Of course, when this album came out, rock and metal fans had something to say about it. Unfortunately, this album was not received in the same way that “That’s the Spirit” was just a few years previously. I read countless articles, social media posts and blogs about fans bashing the album. I cannot even begin to count the number of memes I have seen comparing the band to what they used to be. While there were fans that praised the album, many said that they didn’t like changes in sound that the band had made and that they missed the old Bring Me The Horizon. This album received so much hate, and if you ask me, it doesn’t deserve it at all.

Bring Me The Horizon’s “amo” is a phenomenal album and it shouldn’t be criticized as much as it is. It is a great representation of just how versatile the band can be. The instrumental aspect of the album is unique and different from anything that they have ever done, and if you ask me, it’s absolutely fantastic. The vocals, which are performed by singer Oliver Sykes, range from high dreamy notes to the occasional hard screaming vocal that Bring Me The Horizon has always been known for. As far as the lyrical content of these songs, I believe that some of the lyrics written for “amo” are some of my favorites that the band has come out with.

I can honestly say that I personally enjoy every song on “amo” and I disagree when someone claims that these songs are not good. Some of the more popular tracks off of the album, like “MANTRA” and “sugar honey ice & tea” have been featured on rock radio stations around the world and have been given quite a bit of praise. My favorite tracks off of this Bring Me The Horizon album are “wonderful life” and “nihilist blues,” which features Canadian musician Grimes.

As I have previously mentioned, many original fans of Bring Me The Horizon didn’t approve of their new sound. The most common things that I have seen being said when referring to “amo” have been claims that the band was better when they were heavy or that they were not going to support the new album because they weren’t heavy anymore. The entire claim that a band or musician ‘was only good when they were heavy’ is actually seen quite a bit among the rock and metal community when a band changes up their sound. This claim is incredibly frustrating to me, and it honestly angers me. To stop supporting a band’s new music just because they are not heavy is the stupidest thing. In my opinion, it makes the people that say those things look like complete jerks. I think that you should at least give the new music a try, and if you still don’t like it then that’s okay, but you shouldn’t talk trash about the band just because you prefer the heavier days. That just makes you look bad.

One thing that I find kind of funny is that it appears that Bring Me The Horizon was already expecting some fans to react negatively to “amo.” Most likely, they thought back to the backlash that came from releasing “That’s the Spirit,” even though I didn’t see nearly as much hate when it came to that album. On “amo,” they actually wrote a song that is about people comparing Bring Me The Horizon to their prior heavier days. The track titled “heavy metal” acts almost as a mockery towards the people who constantly bicker that the band isn’t heavy anymore. At the very end of the song, there is even a heavy breakdown to add to it. Both of those features, along with the incredibly awesome beats and rhythms in the song, make me absolutely love “heavy metal.” Here is a line from the chorus of the song: “Cause a kid on the ‘gram in a Black Dahlia tank says it ain’t heavy metal, and that’s alright.”

So, is “amo” my favorite album by Bring Me The Horizon? No, as my favorite album of all time at the moment is the band’s 2020 release, “POST HUMAN: SURVIVAL HORROR”, which I did an album review over back in November. However, “amo” is most definitely in second place. I am constantly finding myself listening to it, from beginning to end without skipping any of the songs. This is truly a magnificent album, and it doesn’t at all deserve the hateful judgement and comments that it receives. For all of those who say that the album sucks because it isn’t heavy, just give it a chance and don’t judge a book by it’s cover. If you are a fan of rock or have any interest in “amo” by Bring Me The Horizon, I highly recommend that you check it out. You won’t regret it.