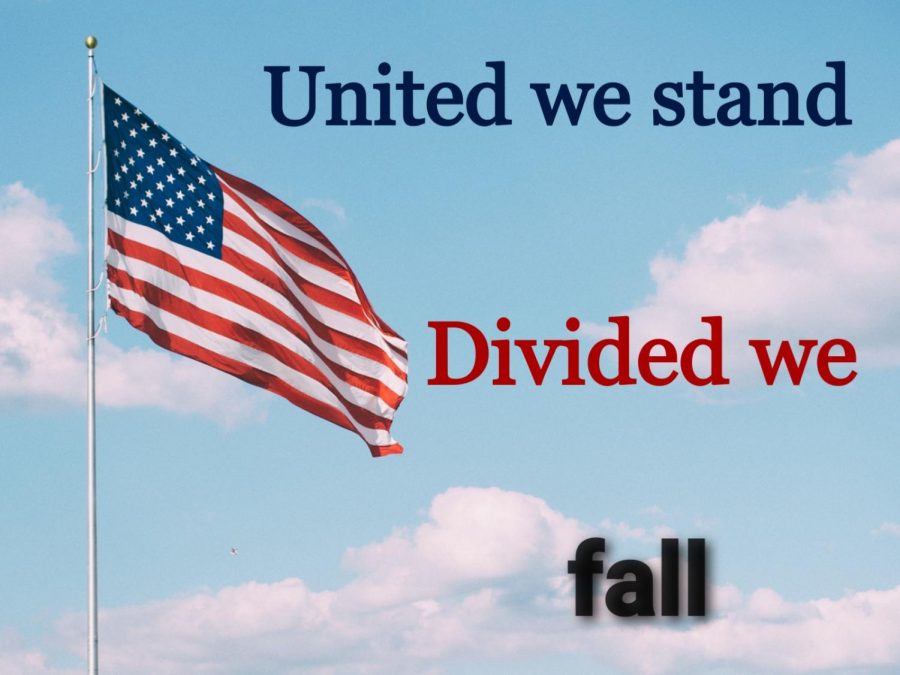 United we stand, divided we fall. Our country right now is in disarray. It’s been coming for a while now. Politics influencing everyone and everything, injustice occurring in every neighborhood, and then a pandemic. It’s as if our country didn’t stand a chance against such violence and hate blossoming. But now it’s time to put down our weapons of words and aggressively declared opinions of right and wrong as if no other opinion is allowed. Because if we can’t talk to vastly different people anymore, how can we be America? An American melting pot was a term created for this country because we have so many cultures and people here. A country of dreams we’ve always known about and nightmares we must accept and learn about.

United we stand, divided we fall. As kids they told us how amazing America is, but they made a mistake in only teaching us the dreams. Because everything comes with imperfections, but that doesn’t mean they can’t still be amazing. Our country’s ancestors made their mistakes, and present day citizens make theirs. However, if we just talk, not fight, talk about the problems and nightmares of the past and present, we can still be that amazing country they taught us we were. The country of dreams and freedom where we get along despite our differences because that’s who we are and what we’re meant to be.

United we stand, divided we fall. America was never supposed to be a place where we all do and believe in the same things. Separate the people from the church was one of many of our country’s ancestors’ dreams. The ability to believe in whatever you want and be who you are and not be punished for it. We seemed to forget about that.

United we stand, divided we fall. At some point in time, we became what our country’s ancestors didn’t want, and some would deny it, but they were also what they didn’t want to be like. Because we have this tendency to not want to be in the wrong, so we fight battles that aren’t ours to be right in something we can never be right about. But how do we just do nothing as others tell their own and their ancestors stories? What we have failed to realize is that we aren’t doing nothing by listening because this is our opportunity to learn. We listen, and we learn. Listen as Native Americans tell us the story of how their land and homes were stolen. Listen as people of color tell us the stories of their lives of facing discrimination left and right. Listen as women tell us why they fear men. Listen as LGBTQ+ explain it’s not a choice or decision it’s who they are. Listen as the communities with disabilities tell us how society needs to change to help them rather than ignoring their voices. Listen to those that tell their stories of abuse and assault. Listen to the cries of injustice from those whose lives have been taken unfairly. Listen to those discriminated against because of their religious beliefs or immigration status.

Then we take what we heard, and we learn. Then, and only then, will we be better than that amazing country of dreams they told us about as children. Because we’ll be the country of dreams and nightmares. Nightmares that we listened too and apologized for and made it right. Not because we are necessarily the ones who caused the nightmares in the beginning, but because those that built the nightmares are gone in the past along with those they harmed. But we’re here, and unlike our country’s ancestors, we will make it right. Because united we will stand and divided we will fall.