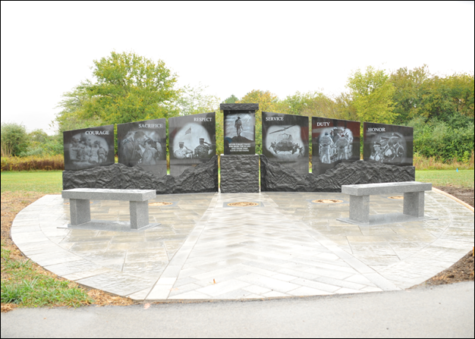 The Lake Land College community honored the sacrifices of veterans and their families this month during a ceremony dedicating the newly built Veteran’s Memorial Wall on Friday, Oct. 11. The wall symbolizes the respect Lake Land College has for all the brave servicemen and women that have made the ultimate sacrifice, giving their lives for our country’s freedom and prosperity.
This memorial was made a reality through the hard work of Lake Land College Trustee Mike Sullivan and the Lake Land College Foundation Board of Directors. Mike Weaver, former State Representative, Air Force Veteran and a current member of the American Legion Post #88, provided the keynote at the ceremony. Remarking on the memorial, “It’s [the memorial] an inspirational monument to the relationship between veterans and education.” He went on to say, “Lake Land College enables our veterans to forge preparation with an opportunity towards their goal or personal growth and success most of all. This memorial stands as the testament to the partnership of purpose and mutual regard for the role that each plays in that effort.”
Sullivan, a Navy veteran who has served on the Lake Land College Board of Trustees for the past 32 years, “Throughout all those years living in this area and serving as a board member, there’s always been one thing I kept in mind; we need a memorial to the veterans who’ve served. In the early years, there were a lot of veterans attending, not only Lake Land but at many colleges throughout Illinois.” Sullivan remarks how this inpour of veterans had a big part in building the community college system in Illinois. “Today, we see another surge of returning veterans, this time from Iraq and Afghanistan. They too come to the community college system to start a new life through education.”
The memorial is located on the west side of the campus. The wall stretched 28 feet in length, built from black granite, and the wall depicts the six characteristics of the United States Armed Forces. A quote can be found at the center of the memorial, “Never forget those who bore the scars and those who gave everything.” Due to its remote location, it allows those who go to the wall the ability to reflect on those it honors away from the noise of campus.
The Veterans Memorial Wall is only the first phase of the memorial. The second phase of the memorial will be a solid granite flag constructed near the memorial wall. For more information on how to be a part of the second phase of the memorial project, contact the Foundation Board at 217-343-5363 or [email protected]