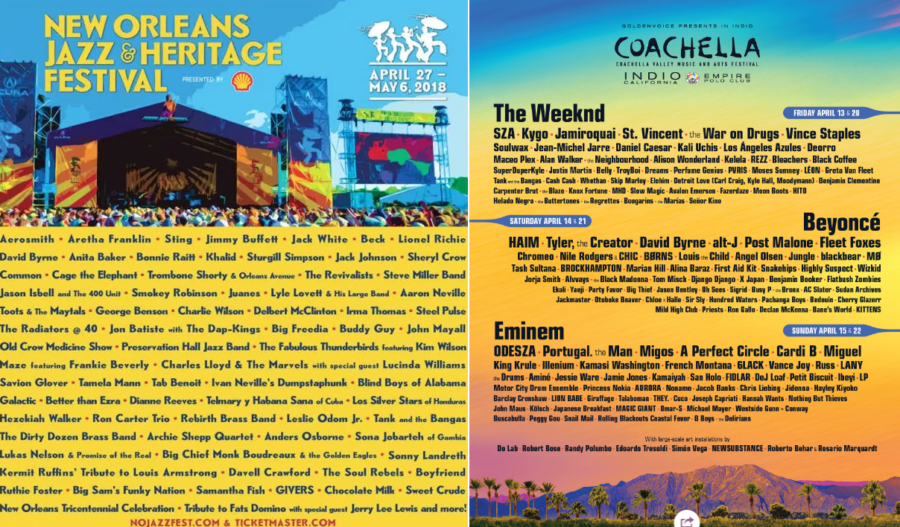 What can be better than attending two, week long festivals that include a selection of the grandest stars of yesterday and today? The New Orleans Jazz Festival and Coachella are both prominent festivities in the United States shared during April.

The New Orleans Jazz Festival is held annually at the Fair Grounds Race Course in New Orleans, Louisiana. As reported on the official New Orleans Jazz Festival website (www.nojazzfest.com), the performances typically ring in 400,000 spectators yearly. This year, the festival kicks off on April 27th and concludes on May 6th. The ten day show features Sting, Rod Stewart, Jimmy Buffett, Lionel Richie, Back, Aerosmith, Jack White, Smokey Robinson, and other great acts as a part of the lineup.

Coachella, hosted from April 13th to the 22nd in sunnyside, Indio, California, not only provides music, but “landmark,” and extensive pieces of physical art to view. A parallel to the New Orleans Jazz Festival, Coachella offers a lineup of hard-hitting, modern stars, from every genre. In hip hop and rap, Cardi B, Post Malone, Migos, Tyler the Creator, and French Montana at Coachella are the premier headliners. HAIM, War on Drugs, and Portugal the Man are representing rock at the festival. Other acts at Coachella include Brockhampton, Aminé, Nile Rodgers & Chic, Daniel Caesar, Snakehips, and the Black Madonna.

Tickets to the New Orleans Jazz Festival can be found at www.nojazzfest.com/tickets.

Coachella’s various passes are on www.coachella.com/guidebook/passes.